The Cincinnati Public Schools (CPS) Middle School Jazz Combo performed at the JAZZING Sant Andreu International Jazz Festival in Spain the first week of September. The group was the only student group from the United States invited to perform at the festival.

Eight sixth-grade students and three seventh-grade students from seven schools across the district headed to Barcelona, Spain to jam with their European Jazz counterparts. They took jazz workshops with prominent guest artists from Europe and South America, and performed in two concerts on the Education Stage.

We are so proud to announce that one of the members is our own Elo Hebard. (Standing to the left of Dr. Isidore Rudnick, holding her saxaphone.) She had been playing the clarinet with the group since the fall of last year but learned the tenor saxophone over the summer to fill a need in the group. Surely that speaks well of her talents! 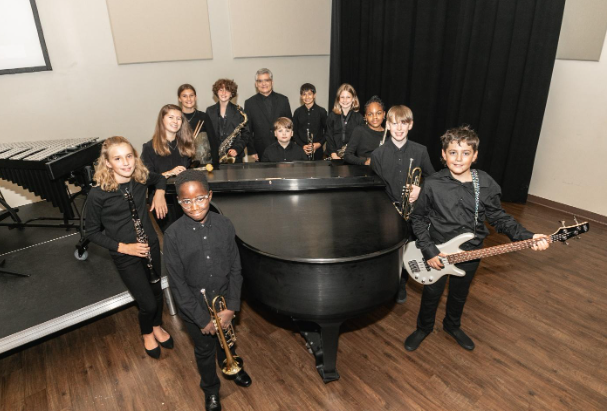 The middle school combo is part of the Youth Jazz Cincinnati partnership between CPS, Activities Beyond the Classroom and Kennedy Heights Arts Center.