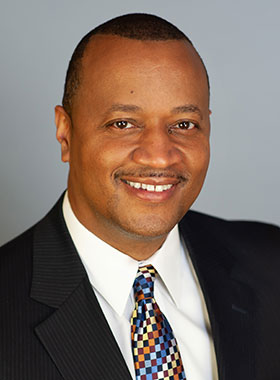 Michael Owens joined the School for Creative and Performing Arts (SCPA) as principal in July 2015, coming home to Cincinnati after a professional career with Columbus (Ohio) Public Schools. Owens is a 1988 graduate of SCPA, where he focused on vocal and instrumental music.

Owens served as a teacher, assistant principal and principal within Columbus City Schools. Most recently, he was the founding principal of Columbus’ Preparatory School for Boys, where he developed the single-gender middle school from its inception. Previously, he was assistant principal at Columbus’ Arts Impact Middle School, and he taught in elementary and middle schools, including at Columbus Africentric School — where he created the school song. Between teaching and starting his career in administration, Owens worked as Columbus’ Peer Assistance and Review Consultant and in the Columbus’ Leadership Intern Program.

He earned a master’s degree in Education Administration and a bachelor’s degree in Early and Middle Childhood Education, both from The Ohio State University.